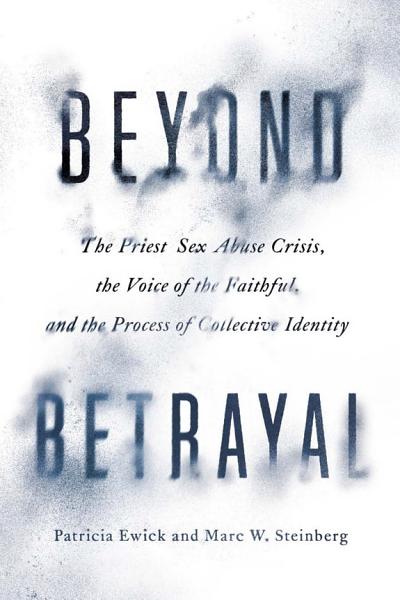 Beyond Betrayal: The Priest Sexual Abuse Crisis, The Voice of the Faithful and the Process of Collective Identity, with Patricia Ewick (University of Chicago Press, 2019)

“It’s not that often that you emerge from reading an academic book feeling personally moved, intellectually challenged, politically excited, yet also wary and a little sad. Beyond Betrayal is a tight, well-argued book that packs a theoretical wallop alongside vivid case material from an intensive, multiyear study of a local organization engaging an issue of urgent social concern. Ewick and Steinberg challenge us to rethink our understanding of collective identity formation within social movements, while providing us with an intimate close-hand look at the reflexivity and cultural work involved in responding to betrayal and moral shock. In short, this is a moving, provocative, and important book.”

“Beyond Betrayal is richly interesting, theoretically sophisticated, and beautifully written. Ewick and Steinberg tell a fascinating story of a group of movement stalwarts: Catholics who, in the wake of priest sexual abuse revelations and determined to act on their feelings of betrayal, spent the next fifteen years developing a far-reaching vision of what the Catholic Church might become and, above all, defining—and redefining—who they were. The book is chock-full of theoretical aperçus, insights that are thoroughly grounded in the case at hand rather than imposed on it. Most of all, I am struck by the authors’ skill in plumbing the nuanced and evolving views of these unlikely activists.”

For those unfamiliar, Voice of the Faithful is a group that began following the discovery of clerical sexual abuse of minors and its subsequent coverup. Ewick and Steinberg’s long-haul study allows us to see the ways the group does identity work as they encounter victories and setbacks in their work for justice and healing. Beyond the content itself, the book is a wonderful contribution to the literature on theories of narrative; . . . an understudied field within sociology. To share a piece of my review:

Beyond Betrayal is a masterfully written book that dives deeply into the minds of individual activists to see the ways they make sense not only of their activism, but also their very selves. This book is sure to invite new questions on meaning and the role of narratives in social life. It is a must-read for scholars in the areas of social movements, identity, emotion, small groups, or framing and would be very useful for those who lead small groups trying to foment social change. (full review in Social Forces)

“The biggest strength of the book is its attentiveness to the mundane and personal in social movement activism: how movements matter to people in them. Showing up to a church basement with like-minded others regularly over the course of fifteen years means something; it changes something. Perhaps not on a grand scale, as may be needed or hoped for, given the crisis of sexual abuse by priests in the Catholic Church, but on the scale of the individual, both intimate and nestled into broader institutions . . . Overall, Beyond Betrayal . . . creates new meanings, new values, and new identities for its readers to consider.”