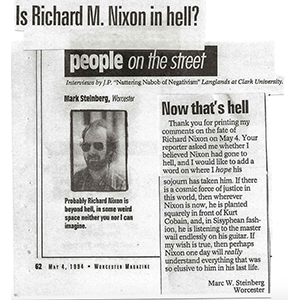 When Marc was at Clark University, a reporter for Worcester Magazine stopped him on the street. Would he weigh in on whether Richard Nixon had gone to hell?

This event has four notable aspects:

Marc took humor seriously, and his brand of humor had a serious lilt.