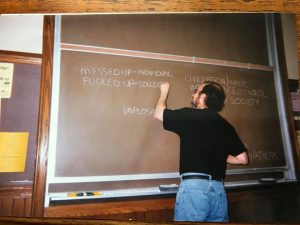 Marc was truly one of the most amazing human beings I’ve ever known, and it is not an overstatement to say that he played a major role in shaping the entire trajectory of my life.

I met Marc in the fall of 1996, within a day or two of my arrival on campus. He was staffing some kind of table for Sociology and I distinctly remember marching right up to him, introducing myself, and telling him that I was going to be a Sociology major. As a kid from the hyper-segregated and highly-polarized city of Chicago, and as a product of Chicago Public Schools, I came to Smith with a well established interest in questions of racial and class inequality. I knew, however vaguely, that sociology was the field through which I could explore those kinds of questions. To my infinite fortune, I landed in Marc’s Introduction to Sociology class that first semester. To put it bluntly, I was immediately hooked . . . hooked to sociology as a discipline and hooked on Marc as an instructor. As all of my friends from college would attest, I quickly became Marc’s #1 fan. (And yes, I know there’s steep competition for that moniker throughout this room!).

Though this was 23 years ago, here’s what I remember.

Marc began every class with a song, curated to address the topic to be explored in that day’s class. We never talked about the songs, but we attentively listened. This not only had the effect of priming us to the topic of discussion, but of humanizing Marc, giving us a glimpse into his personal tastes and passions. That first semester, Marc introduced me to Billy Bragg, and I introduced him to Sleater Kinney. I’d call that a mutually life-changing exchange!

Marc perfected the art of classroom theatrics (passing out potatoes, stepping into a bucket of water, throwing candy at students, etc). But the genius of Marc was that these outlandish antics were always done in the service of the most intellectually rigorous discussions I encountered in the classroom at Smith. To this day, I don’t know how he managed to strike such a delicate balance, but he was astonishingly effective at getting students—with varying degrees of interest—engaged with course material.

Marc was kind, patient, and unabashedly earnest, which made him the most endearing teacher you could ever imagine. He worked doggedly to forge connections with students and to help students understand abstract, theoretical material. He did so by taking students’ ideas — however naive and half-baked— seriously and helping them develop those ideas in a more sophisticated matter. This was a skill and, it seemed, a bedrock commitment.

I spent my remaining years at Smith taking every single course I possibly could with him, including Theory, Social Movements, and Contemporary Social Theory. Across the board, they were the best courses I took at Smith and they laid a lot of the groundwork for my desire to pursue, and my success within, graduate school.

In preparing to come here, I rifled through some old boxes hoping to find the papers I wrote for Intro, but instead finding my notebook and papers from the Contemporary Social Theory course I took with him my senior year. Marc used to write these lengthy and hilarious introductions to each unit. For our segment on theories of culture, for example, Marc entitled his 2000-word intro “Ain’t Youz Cultoired? Approaches to Culture” and began with the following: “Well, you damn well better be after hanging around an elite women’s college for all of these years. After all, that’s what it’s really about, isn’t it? Actually, one of our theorists for this unit, Pierre Bourdieu, argues just that, but more on him later.” Later in the intro, he wrote: “Since we’re into popular culture, I s’pose you want something au current, non, mes amis? Well, I have just the thing for you. Hows about a little bit of postmodernism? Yup, theories under the rubric of postmodernism are all the rage now in many circles in the academy, and many former (neo- and now post-) marxists are among its biggest subscribers. As we will see throughout our seminar, it is difficult to pigeonhole postmodernism with a clear and select group of tenets. However, the excerpt from Jean Baudrillard’s ‘Simulations’ is considered by many to be exemplary. Now, it’s likely that your first reactions to reading this excerpt will be “Huh?!” and “This dude is whack!” But hold on; he may be a bit of a space shot, but there is nonetheless meaning in his madness.”

Marc provided thoughtful and generous feedback on everything I wrote, pushing me to recognize the naivete of some of my own thinking and urging me to think more deeply about, or beyond the scope of what I wrote. Much of this was achieved by simply posing questions back to me. So receiving back one of Marc’s papers always felt like getting engaged in some kind of intellectual discussion. 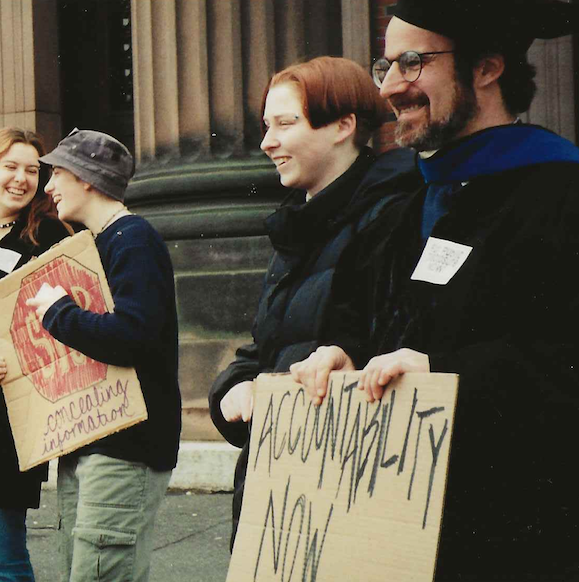 Marc’s support and mentorship extended well beyond the confines of the classroom. I was, for example, one of the founders of the Student Labor Action Coalition (SLAC). Marc was our strongest faculty member supporter. He regularly sat down with us to talk strategy, joined us for some of our meetings to pressure the administration to join the Worker Rights Consortium, and showed up in support of our rallies and actions. After I returned from a USAS delegation to Nicaragua, Marc helped me and another student organize a forum to discuss current campaigns in the anti-sweatshop movement. Additionally, as a senior, I had a labor music show on the student radio station, WOZQ 91.9 Northampton. It was a two-hour radio program at some odd hour of the night. Marc was a devoted listener and would occasionally call in to the station to request a song. When I was studying abroad in Geneva, Marc was on research leave in England. When he learned we were going to be in London, Marc invited my mom and I to spend a day traipsing around with him in Oxford.

Marc’s support and mentorship extended well beyond my time here at Smith. He regularly checked in on me throughout graduate school. We also always got together during ASA. Because the ASA usually coincides with my birthday, Marc attended many of my birthday gatherings. Even more, on probably five or six occasions, Marc showed up to some talk I was giving, at ESS or ASA, always to my disbelief (surely, I thought, he must have somewhere more important to be!). When I asked, he always claimed that the panel sounded interesting, but I knew he was always there to support me.

As an undergrad, I was just in awe of Marc as a pedagogue. I had an inkling that he was always busy doing research, if only because, late at night, I’d always see his office light on in Wright Hall. Or I’d see him shoeless and waddling around the 3rd floor reading room in Neilson Library. But it was only after I left Smith that I came to realize how absolutely brilliant and productive he was as a scholar. In my second year of the PhD program at UC Berkeley, Marc — seemingly out of the blue — sent me, via snail mail, the draft of a manuscript with a tiny handwritten note on it that said “now it’s your turn to give me feedback.” I remember struggling more with that manuscript than with anything I had been assigned in my graduate-level coursework up to that point. I sweated my way through it, the whole time thinking that I wasn’t really capable of it, but pushing myself to do so because Marc thought I could. That manuscript was eventually published in _Theory and Society_ as “Marx, Formal Subsumption and the Law.”

Saying goodbye to Marc was one of the hardest things I’ve done, and I’ve spent the last five months wanting desperately to be in denial that he’s gone. I miss—and will continue to miss—him. It is my 20th reunion this spring, and it’s devastating to know that, in the admittedly unlikely event that I decide to come, he won’t be around.

But I feel so fortunate. Marc doesn’t just persist for me in fond, but distant, memories. He gave me a gift that keeps on giving. He provided me a model of how to combine exemplary teaching and rigorous critical scholarship, all with a disposition of kindness and an almost unthinkable level of humility. I don’t claim to even come close to living up to that model. But it does feel like a gift that, day in and day out in my own work as a teacher, scholar, and mentor, I get to draw inspiration from him.

Thanks to all of you for being here to help honor Marc.